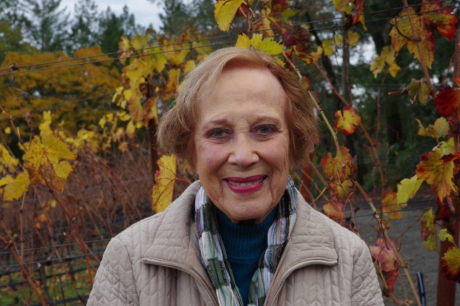 Adelle ‘Boots’ Brounstein, co-founder of Diamond Creek Vineyards and one of the pioneering generation of Napa Valley wine producers, has died at the age of 92.

Brounstein and her late husband founded Diamond Creek in 1967, achieving a series of firsts over the coming years, including the first all-Cabernet Sauvignon vineyard in California, and the first US$100-a-bottle wine from the state.

‘Boots’ – she was given the nickname as a baby – died after a short illness earlier this week after helping to run Diamond Creek for more than half a century.

‘Mom was the heart of Diamond Creek,’ said Phil Ross, her son. ‘What she and Al did as pioneers, helping to bring the French idea of terroir to the Napa Valley, was extraordinary, perhaps only exceeded by the great work she did over the past decade since Al’s passing to maintain Diamond Creek’s renowned place in the wine world.’

Adelle met Al, a pharmaceutical wholesaler and wine enthusiast, on a blind date in the 1960s, and the couple acquired their 70-acre estate on Diamond Mountain, south of Calistoga, in 1967, the same year they married.

The small, 20-acre estate was later expanded with the creation of Lake vineyard in the early 1970s, with the 1978 Lake vintage the first wine from California to fetch US$100 a bottle.

However, Diamond Creek was said to have taken 15 years to turn a profit, with early critics questioning its pioneering ‘boutique winery’ philosophy – production limited to roughly 2,000 cases a year – and the concept of bottling single-vineyard wines.

Napa Valley Vintners called ‘Boots’ a ‘dedicated and generous NVV member and an inspiring advocate for the entire Napa Valley.’

A date for a memorial service in the Napa Valley to celebrate Boots’ life is to be announced.